In our western society, dementia is an increasingly common phenomenon. A number of institutions have been set up in the Netherlands with this specific theme in mind; these foundations distribute information and research results concerning dementia.

For example, when asked what dementia actually is, the Dutch Alzheimer Foundation gives the following answer:
“Dementia is the name for a combination of symptoms (a syndrome), in which the brain can no longer process information properly. Dementia is a collective term for more than fifty illnesses.” (www.alzheimer-nederland.nl, 03-01-2018).

The Dutch Brain Foundation gives a similar description:
“Dementia is the collective term for a variety of brain diseases in which mental abilities (e.g. memory, language) deteriorate. Dementia is often associated with old age, however it is not an inevitable consequence of old age. Most people over 65 years of age do not have mental health problems, even though certain cognitive abilities are not as they were in their ‘younger years’ – which is a very natural process.” (www.hersenstichting.nl, 03-01-2018).

The Dutch Alzheimer Foundation notes the following with respect to the extent of dementia in the Netherlands
“One in five persons develops dementia. Women have an increased risk: one in three women develops dementia during their lifetime. The older a person gets, the greater the chance of developing dementia. Beyond the age of 90, a good 40% of people have some form of dementia.” (www.alzheimer-nederland.nl, 03-01-2018).

Various forms of dementia are distinguished. The most common form is Alzheimer’s disease (70%), a condition in which the cells in certain parts of the brain no longer function. Vascular dementia is another fairly common type of dementia. This condition is caused by the narrowing or closing off of blood vessels in the brain. These two forms of dementia are involved in more than 90% of the cases. There are other forms such as: dementia with Lewy bodies, Parkinson’s Disease and frontotemporal dementia. Often these different forms of dementia cannot be easily distinguished from each other. In this book no distinction is made between the different forms. The insights and recommendations described in this book may apply to any form of dementia.

Fear of dementia is substantial and is actually spreading. It is often assumed in public discussions that dementia is primarily a degenerative process which affects a person’s core being. This point of view leads to an increase in requests for euthanasia. For that reason it is important that in this time and age more spiritual knowledge is released about what dementia means for the soul of the person with dementia. This book is about just that. It provides descriptions of non-physical processes which take place behind the directly visible symptoms.

There is a lot of misunderstanding about dementia and also still a great lack of knowledge about the underlying causes. In medical science dementia is considered to be a condition that is almost always caused by the deterioration of the brain.

In this book it is also assumed that dementia has a physical cause. However, in many cases there is also a psychological constellation in which the development of dementia gets a chance. It is assumed that dementia has something to say to human beings, that it can be a meaningful process provided that its relevance and value is understood. This innovative approach can give hope, courage and consolation to the person involved and to people close to him or her. The new knowledge is about the inner state of a person with dementia, his field of experience and spiritual development. How those who care for a person with dementia may use these insights is also discussed.

In a person with dementia, certain parts of the brain no longer function adequately, causing previous mental censorship to weaken and/or disappear. This offers the person a chance to re-experience without censorship experiences that remained underdeveloped or suppressed.

For people working in healthcare

There are many people working in healthcare who already do their work well according to the latest regular insights. They also achieve good results. However, their working methods are often not aimed at stimulating and supporting the deeper inner processes of the person(s) with dementia under their care. There are those who think that if they allow these new insights, this will be at the expense of their current way of working.

However, the opposite is true.
It would be very helpful if people understand more deeply that dementia is a backlog in processing for reasons that are justifiably so. Matters were once too serious or people were too preoccupied at some point. There was a difficult situation which made it so that there was really no time for processing. It may also be that people were raised with the expectation to put up with things, consequently they did not know that experiences need to be processed. If room is made to clear the backlog in processing more serious forms of dementia can be prevented.

The insights described in this book are important, not only for those with dementia but also for society at large. Young(er) and middle-aged people can use this knowledge for the benefit of their own parents and for persons who are already with dementia, but also for their own benefit. When people are taught at an early age to process what daily comes on their path, then this is beneficial to their health and (advance of) dementia can in many cases be prevented. 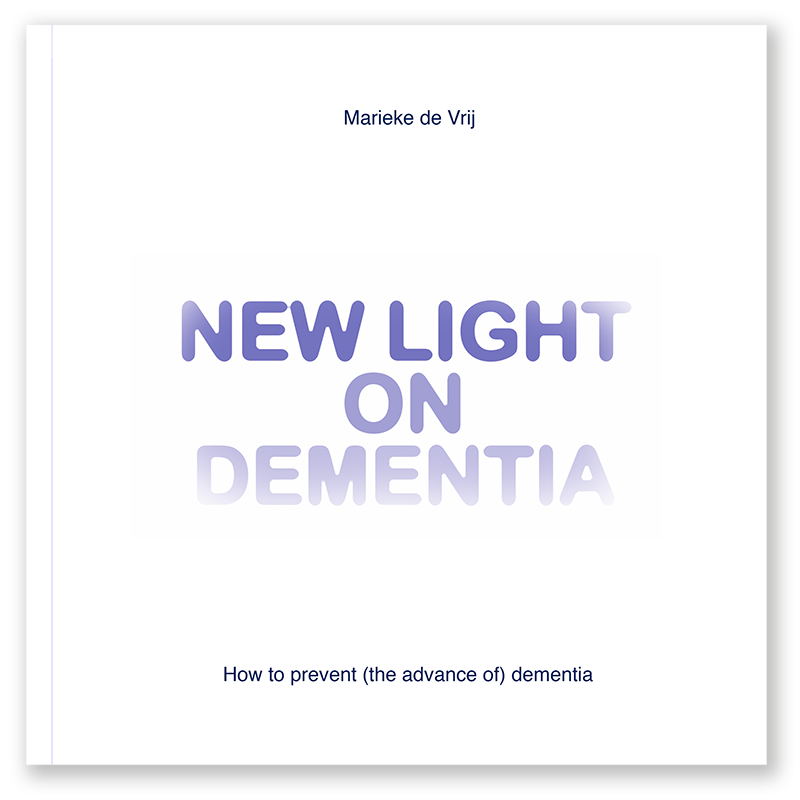 Spread the word and share the book
We would like for everyone to be able to read, learn and talk about this book and exercises. And even more important: to benefit from its insights and wisdom. That is our passionate dream. So please, feel free to share this with all who can benefit, who work in the field, family and friends of people with dementia. In a nutshell: everybody. Spread the word. Thanks!

SEND TO A FRIEND

Help us to do the work
We are very happy that we can offer you this book and exercises for free. We dream of doing more research. Check out our plans for research. If you want to support our work, feel free to make a donation! It is very much appreciated. We feel it is also important for you to know that all donations are explicitly spend on bringing new inspirations into the world, we hope to stimulate growing awareness, so you can become your full potential and serve the world. Thank you!